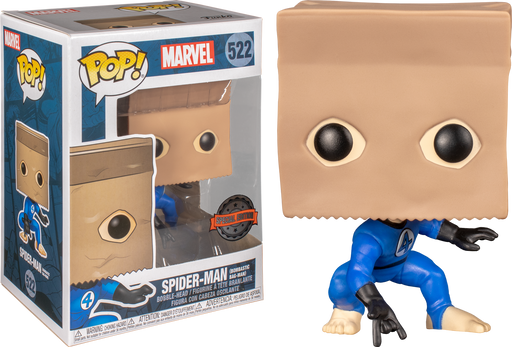 Wearing a paper bag on your head can have many benefits, the main one being that it allows you to conceal your true identity before you head out to fight crime. One person who is certainly aware of this is Peter Parker, who created the Bombastic Bag-Man suit in The Amazing Spider-Man Vol. 1 #258 as a result of being separated from the alien symbiote in the Baxter Building.

When Reed Richards first examined the alien symbiote and separated it from Peter, he was left without a costume and could not simply go web-slinging undisguised as it could reveal his true identity.

At the mercy of the Human Torch, he was given a spare, older version of a Fantastic Four costume with no footwear, a loose brown paper bag as a mask, and a "Kick Me" sign on his back, placed by Johnny. The suit is also available in the smah-hit 2018 video game, Marvel’s Spider-Man.

This hilarious Pop! features Parker in the hilarious Bombastic Bag-Man suit, crouched down as he prepares to sling himself into your collection!