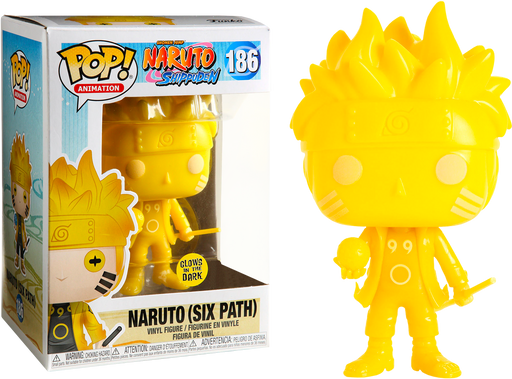 Premiering in 2007, Naruto: Shippuden is a hit Japanese manga/anime series that tells the story of Naruto Uzumaki, an adolescent ninja who searches for recognition from his peers, dreaming of becoming the Hokage, the leader of his village. The anime was adapted from part 2 of the Naruto manga series.

In Naruto: Shippuden, "Six Paths Sage Mode" is a divine transformation gifted by Hagoromo Ōtsutsuki to those who have an iron faith and the guts to never give up. It significantly enhances the user's powers and allows them to use a number of new techniques, which if you ask me sounds like a pretty handy addition to one's repertoire.

Here we have the unique Yellow Naruto Uzumaki in his Six Path mode, complete with a stunning Glow in the Dark finish.

No Naruto collection is complete without the Naruto Six Path Yellow Glow in the Dark Pop! Vinyl Figure!