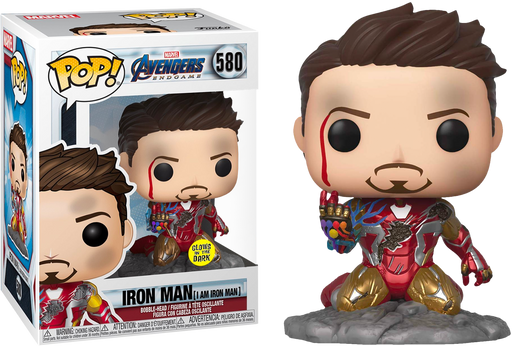 Avengers 4: Endgame - I Am Iron Man Glow in the Dark Pop! Vinyl Figure

Avengers 4: Endgame - I Am Iron Man Glow in the Dark Pop! Vinyl Figure

It’s arguably the most defining moment in all of the MCU. An entire decade of brilliant storytelling lead us on a journey that climaxed with one almighty… click.

Yes, Avengers: Endgame was the epic ending to the Infinity Saga, where all of our favourite Marvel heroes teamed up to bring an end to the evil reign of Thanos, after he wiped out half of the universe with a single click of the Infinity Gauntlet.

Well thankfully Tony Stark was able to build a handy Nano Gauntlet of his own, and once he possessed those Infinity Stones, it was game over for the evil tyrant. The only catch being that Tony was forced to sacrifice himself in the process.

Funko’s new Iron Man Deluxe Pop! Vinyl may just be their ultimate Marvel release, as it showcases the iconic moment Tony clicks his fingers with the Nano Gauntlet just moments after uttering the words, “I am Iron Man.” He comes knelt down on a sculpted terrain base, blood trickling down his face, however more importantly, his suit Glows in the Dark!

Without a doubt, every true Marvel fan needs this piece in their collection so that they can love it 3000 for all eternity.