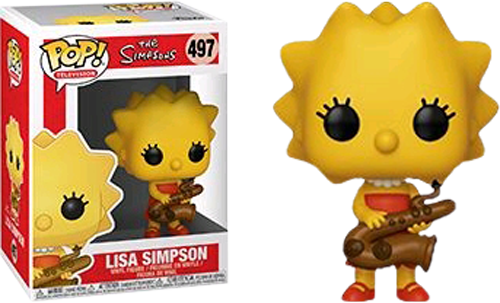 It’s official, the most cromulent Pop! Vinyl figures have escaped from the Fortress of the Moles and are looking to embiggen your Funko collection. You guessed it, the new wave of The Simpsons Pop! Vinyls are finally here!

The Simpsons is one of the greatest television shows of all time, giving an entire generation an alternative to the 6pm news report. Remember the days of being glued to the TV watching Simpsons marathons when boring stuff like the Olympics were on the other channel? Those were the days.

This new wave features the remaining members of the Simpson family who didn’t appear in the first wave many years ago, which were actually the first Pop! Vinyls to ever appear in the Pop! TV line! Here we have Lisa, complete with her saxamophone, Maggie with pacifier, Grampa, who can’t wait to enlighten your collection about the time he wore an onion on his belt (it was the style at the time), as well as Bart’s superhero alter-ego Bartman, complete with purple mask and cape.

Joining the Simpsons are some other fan favourites; on the theme of superheroes we have Radioactive Man, meaning Bart may finally be able to live out his dream of being his hero’s sidekick (up yours Milhouse! Not really, we love you). If the weight of the world has got your Pop! Vinyl collection down and they want to end their lives, have no fear because Uncle Moe is here to pour a Flaming Moe or three. Rounding out the wave is the excellent Mr Burns, twiddling his fingers as he devises a new plan to benefit from the suffering of the residents of Springfield. At least we’ve got Maggie around to keep him at bay.