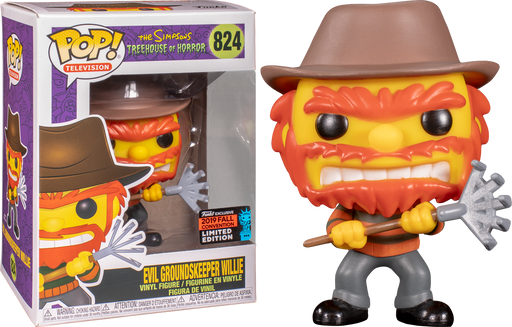 “I’ll strike, where you cannot protect them… in their dreams!”

Yes there's no denying that The Simpsons is one of the greatest television shows of all time, giving an entire generation an alternative to the 6pm news report. Remember the days of being glued to the TV watching Simpsons marathons when boring stuff like the Olympics were on the other channel? Those were the days. Well Funko's cromulent new wave of Simpsons Treehouse of Horror Pop! Vinyl figures are here and they are sure to embiggen your lives!

Here we have Groundskeeper Willie as Freddy Krueger, as seen in Treehouse of Horror VI’s Nightmare on Evergreen Terrace, which sees Willie slaughter the children of Springfield in their dreams, that is until he meets his match… Maggie’s pacifier. He comes complete with his striped sweater and armed with his rake.