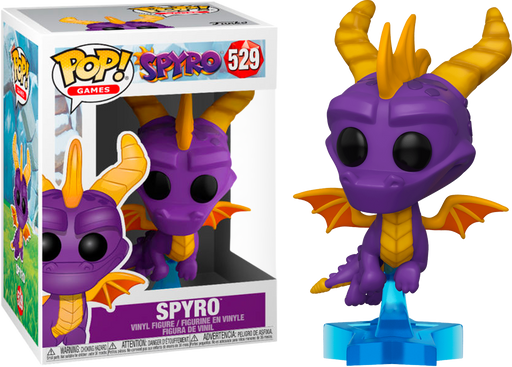 Spyro the Dragon first entered our lives in 1998 in the first installment of what would become one of the most beloved video game franchises of the last 20 years. The game followed the story of, you guessed it, Spyro, a young purple dragon and his dragonfly friend, Sparx, who venture through the dragon kingdom to rescue the other dragons from a spell placed by the antagonist, Gnasty Gnorc.

Spyro inspired a whole new generation of gamers recently with the HD re-release of the original trilogy, and now fans can bring Spyro home with Funko's new wave of Spyro the Dragon Pop! Vinyl Figures.

The wave includes Spyro in his flying pose as he glides over a themed base, as well as the two most iconic baddies from the series. First up we have Gnasty Gnorc, the main villain from the original Spyro the Dragon game, complete with his club filled with green magic. He's joined by the evil Ripto, that little dinosaur with a big chip on his shoulder from Spyro 2: Ripto's Rage.