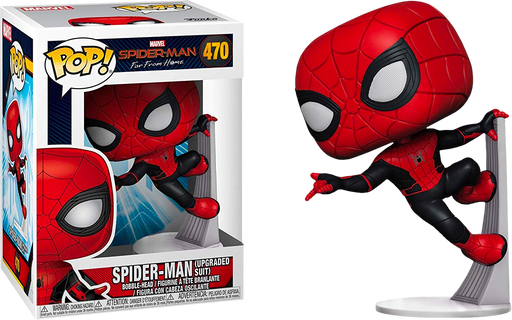 This new wave of Spider-Man: Far From Home Pop! Vinyl Figure features several versions of our Spider-Man; we’ve got him taking a cheeky selfie, possibly with some crooks he’s just wrapped up in his web. We also get Spidey in his new black stealth suit, as well as a pretty unique “Wall Crawl” Pop! that features Spider-Man clinging to the side of a wall as he’s about to sling some webs!

On top of those we also get Michelle “MJ” Jones, one of Peter Parker’s classmates. She’s armed with a mace, so you know not to get on her bad side. Rounding out the wave we have the always funny Harold “Happy” Hogan, complete with a $500,000 cheque. Happy is the former head of security for Stark Industries and is now Peter Parker’s bodyguard, so at least you know he’s in good hands.