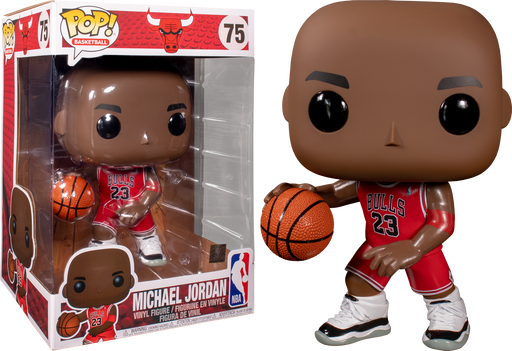 He's one of the NBA's most larger than life characters, so it's only fitting that Funko have added the immortal Michael Jordan to their series of gigantic 10" Pop! Vinyl Figures.

Michael Jordan is the most celebrated NBA stars of all time, taking the Chicago Bulls to 6 Championships in the 1990s. He's a man who transcended the sport and became a global icon in his own right, leaving behind a legacy that inspired a whole generation of athletes.

At a whopping 10" tall, this Pop! features Jordan wearing his iconic #23 Chicago Bulls jersey as he handles the basketball, looking to add another slam dunk to his resume.

Believe me when I say that stock is strictly limited, these won't last long! An absolute MUST for any true Michael Jordan fan!