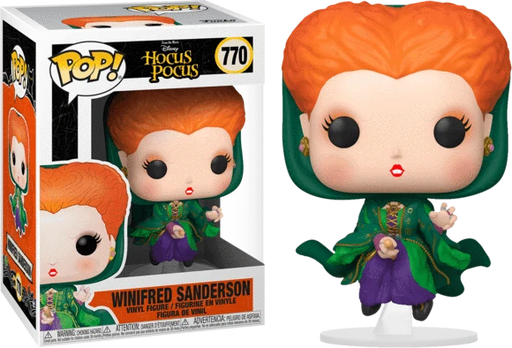 It’s time to pull out the spell books and prepare the gallows because Funko’s incredible new Hocus Pocus Pop! Vinyl Figures have finally arrived to steal your soul.

Featuring all three Sanderson sisters, Winifred, Sarah and Mary, this wave of Hocus Pocus Pop! Vinyl Figures are the perfect decoration this Halloween season. We've got Winifred with her broom, Sarah with her mop and Mary with her vaccuum, all of whom come fixed to a base to give the impression they're flying through the air. So when they're done flying around, who knows, maybe they'll also tidy your house?

Also available is an Exclusive 3-Pack featuring all three sisters!

With Halloween just around the corner, what better way to prepare yourself for the spookiest night of the year than by adding the Hocus Pocus Flying Pop! Vinyls to your Funko collection today.