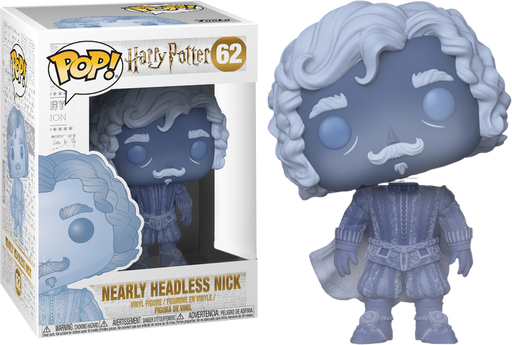 "I haven't eaten for nearly five hundred years. I don't need to, of course, but one does miss it. I don't think I've introduced myself? Sir Nicholas de Mimsy-Porpington at your service. Resident ghost of Gryffindor Tower."

This is one Funko's most exciting Harry Potter waves to date, including not only the usual suspects, but also some other fan favourites who are finally getting the Pop! Vinyl treatment.

This Pop! features Sir Nicholas de Mimsy-Porpington, known after his death as Nearly Headless Nick. He was a wizard who attended Hogwarts School of Witchcraft and Wizardry and was Sorted into Gryffindor House, until he was executed by an improper decapitation, after he had a magical mishap with Lady Grieve, in which he tried to straighten her teeth but it backfired and she grew tusks.

An absolute MUST for any true Harry Potter fan!