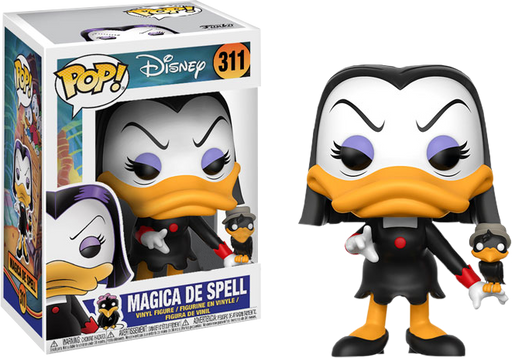 “Life is like a hurricane, here in Duck Burg
Race cars, lasers, aeroplanes, it's a duck blur
Might solve a mystery, or rewrite history!”

Running from 1987-1990, DuckTales quickly became one of the most beloved Disney television programs of its era with a total of 100 episodes over four seasons. It even spawned movies, video games, action figures and now… Funko Pop! Vinyl Figures!

The show follows the adventures of Scrooge McDuck and his three grandnephews, Huey, Dewey, and Louie. In a typical story, the villains are after McDuck's fortune or his Number One Dime; another common theme is a race after some sort of treasure.

This Pop! features the evil sorceress Magica De Spell, who is constantly trying to find new ways to steal Scrooge McDuck’s Lucky Number One Dime. Keep her under control by adding her to your Funko collection today!