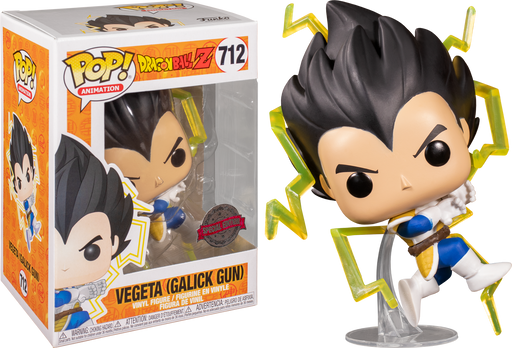 Dragon Ball Z is one of the most critically-acclaimed anime series of all time, amassing an enormous fan base across the world over the past 25 years.

The show follows the adventures of Goku who, along with his companions, defends the Earth against an assortment of villains ranging from intergalactic space fighters and conquerors, unnaturally powerful androids and nearly indestructible creatures. It picks up five years after the end of the original Dragon Ball series.

Here we've got one of our favourite Vegeta Pop! Vinyl Figures to date. Much like the Kamehameha, the Galick Gun is an Energy Wave that is one of Vegeta's signature attacks, capable of destroying large planets if enough power is put into it. More importantly, it comes with a Metallic Chase@

We promise no matter how powerful it gets, this Pop! won't destroy your Funko collection, so order it today!