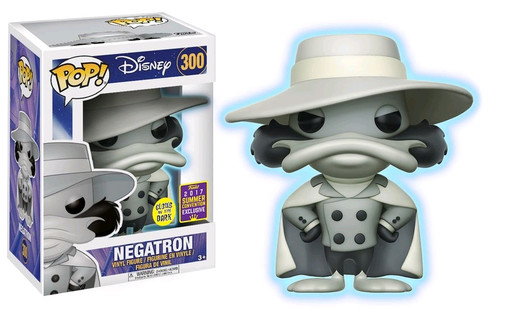 It’s time for celebration once again as we present Funko’s wave of 2017 Summer Convention Exclusives! Be the envy of all your Funko-collecting friends by adding these to your Funko collection today!

Airing for three seasons from 1991-92, Darkwing Duck has developed a massive cult following, even launching its own comic series in 2016.

The TV series follows the adventures of Drake Mallard, a suburban father of Gosalyn who fights crime under the guise of Darkwing Duck. His sidekick is Launchpad McQuack, known for his role in the equally-popular Disney series, Ducktales.

This Glow-in-the-Dark Pop! features the Negatron version of Negaduck, the first antagonist from Darkwing Duck to use the name "Negaduck". While the second Negaduck was Darkwing's evil twin from a parallel universe known as the Negaverse, this Negaduck was a living manifestation of Darkwing's evil side.