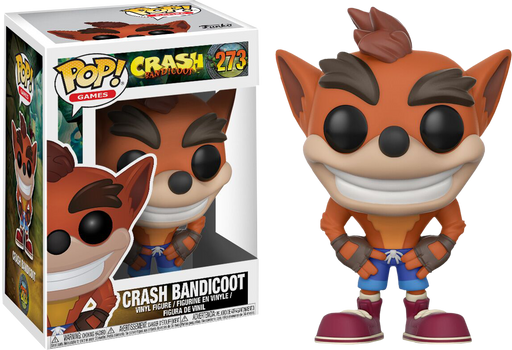 Since its release in 1996, Crash Bandicoot has become on of the most celebrated video game franchises of all time, selling over 50 million copies worldwide. In 2017 that brave marsupial returned to our concoles when he was re-released on the PS4 in an updated (yet more difficult) version of the original series of games. Whether it's smashing boxes to collect apples, riding a hog in 'Hog Wild' or outsmarting deadly bosses such as Ripper Roo and Koala Kong on his path to taking down Dr Neo Cortex, Crash Bandicoot certainly knows how to have a good time!

This Pop! features Crash Bandicoot himself, wearing his trademark blue shorts and sporting that big cheeky grin we all love him for.

The Crash Bandicoot Pop! Vinyl series is an absolute essential addition to any fan's collection!