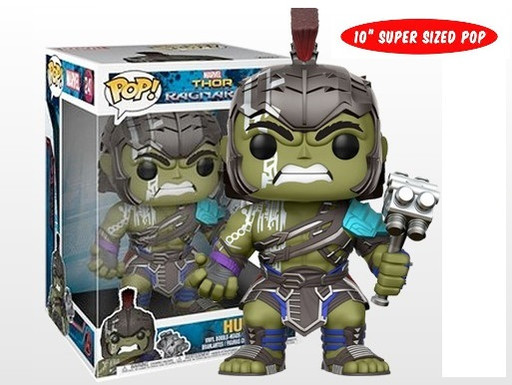 Finally a Hulk Pop! Vinyl worthy of his name!

After the events of Avengers: Age of Ultron, Thor, held captive on the planet Sakaar without his hammer, must win a gladiatorial duel against an old friend the Hulk, in order to return to Asgard in time to stop the villainous Hela and the impending Ragnarök, the doom of the Asgardian civilization!

This 10" Pop! Vinyl features Hulk, who in the film has become a successful and popular gladiator on Sakaar. He's huge, he's wearing his gladiator suit and his head bobbles, making this arguably the greatest Hulk Pop! Vinyls on the market! He will literally tower over the rest of your Marvel Funko Pops.