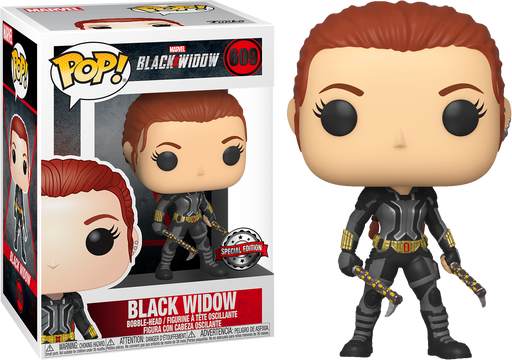 Don’t be confused Marvel fans, we’re well aware of the events of Avengers: Endgame involving Black Widow, so how can she have her own movie you ask? Magic.

No not really, it's because Marvel’s new Black Widow film is a prequel of course! Following the events of Captain America: Civil War, Natasha Romanoff finds herself alone and forced to confront her past.

Funko’s new wave of Black Widow Pop! Vinyl Figures features a range of characters from the film including Black Widow herself, Natasha Romanoff, as well as Black Widow wearing a fancy White Suit. Joining her is the Russian super soldier Red Guardian and Natasha’s best friend Yelena Belova, however the guy I’m most excited for… Taskmaster, who comes in two variations, one holding his bow and the other his sword and shield

Now that's the standard wave, however what we have here is the EXCLUSIVE Black Widow, who has swapped out her White Suit for thie Grey ensemble.