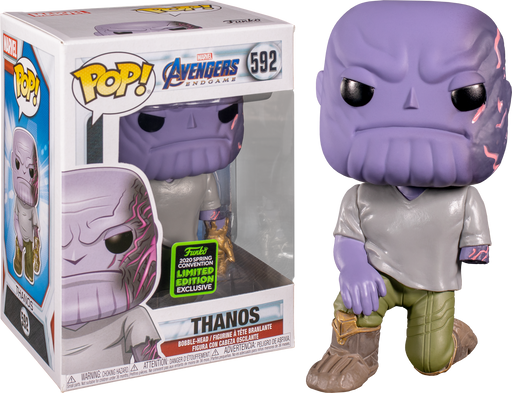 It's not easy bein' green, it seems you blend in with so many other ordinary things. Well have no fear because Funko are ensuring this year’s Emerald City Comic Con is an exception to the rule with their exciting wave of 2020 Spring Convention Exclusives! Featuring characters from some of the most iconic movies and television series, this wave has a little sumthin’ sumthin’ for everyone.

There isn't a Marvel fan alive who wasn't salivating at the thought of what would transpire in Avengers 4: Endgame. Its predecessor was one of the highest grossing films of all time, leaving the MCU in absolute tatters after the infamous "click". In Endgame it up to the remaining heroes to try and restore what once was and help take down the evil tyrant Thanos for good!

Here we have said tyrant, Thanos, complete with a detachable arm from the moment The Avengers cut it off. It may have appeared that Thanos was vanquished in Endgame, but as they say, you can’t keep a good tyrant down.

Do "whatever it takes" to ensure you have the greatest Marvel collection of all by securing yourself the new Thanos Pop! Vinyl Figure today!